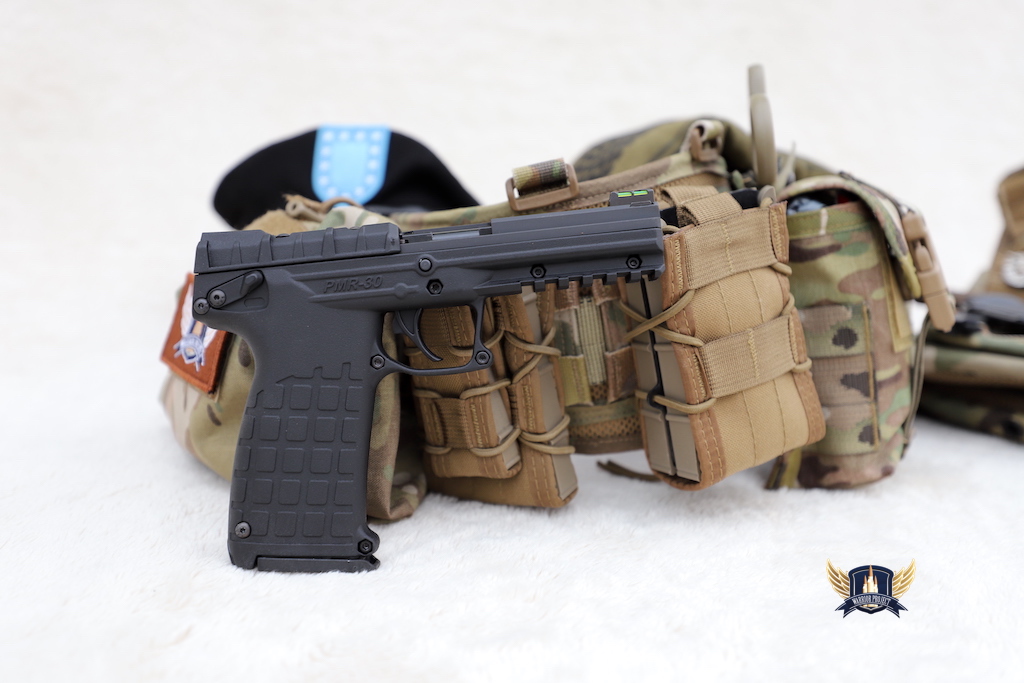 Kel-­Tec PMR-30 is a semiauto pistol that reliably chambers .22 WMR

and feeds from a 30-­round, double-­stack magazine. Kel-­Tec describes the pistol's operation as "hybrid blowback."There is no description what ?hybrid? really is. I think delayed blowback. For starters, pressure levels in rimfire ammunition vary greatly and that can lead to feeding issues. Additionally, rimmed cartridges make designing an effective double-stack magazine a challenge. But Kel-­Tec's designers eventually proved that - with the right engineering a double-stack semiautomatic rimfire pistol could be reliable.

The hybrid blowback action combines elements of both locked-breech and blowback designs subject to pressure levels. With higher pressure loads, the barrel moves slightly rearward with the slide as it would with a traditional locked-breech design. When firing lower-­pressure loads, the PMR-­30 acts akin to blowback firearms. This versatility means that the PMR-30 will cycle the wide range of .22 WMR ammo available.

The pistol's magazine, along with its frame and grip, are made from durable Zytel polymer (high strength, abrasion and impact resistant thermoplastic polyamide). The material is lightweight, as well as heat and impact resistant. With an overall length of 7.9 inches (20 cm), a 4.3-inch barrel, this pistol might be the ideal trail gun. While there are those who decry all rimfires for personal protection, a .22 Magnum pistol with 30 rounds such as this is not without merit as a defensive option, especially considering that the PMR-­30 produces scant felt recoil and little muzzle rise.

The controls are relatively standard with an ambidextrous, two-position, safety lever under the back of the slide. When the lever is down, a pill-­shaped red bar indicates the gun is ready to fire. On the left side of the gun, just ahead of the safety, is the slide stop. The mag release button is on the grip's heel. Other key features include an accessory rail under the barrel and fiber-­optic sights. There's also a plate in front of the rear sight that allows for the addition of a red-­dot optic. Even with all the neat engineering and features, the complexities of building a reliable double-stacked rimfire pistol still leave some concerned of its reliability. For us, the PMR-­30 had zero cycling issues and proved to be completely reliable with the full range of ammunition tested.

The sights are well-­adapted for close-­range shooting in low light, but they're rough for target work. If equipped with a red dot such as an Aimpoint Micro, I believe this pistol would be completely capable of dispatching small game at 25 yards - or even farther. Without a doubt we can find similarities to the pistol FN 5.7 chambered in 5.7x28 which is almost 3,5 times more expensive and the ammunition price is around 4 times more than .22WMR. In this way we have a very good quality standard pistol chambered in the most powerful rimfire ammunition.

Below there is table of technical characteristic of .22WMR, 5.7x28mm and 9x19mm Para ammunition.