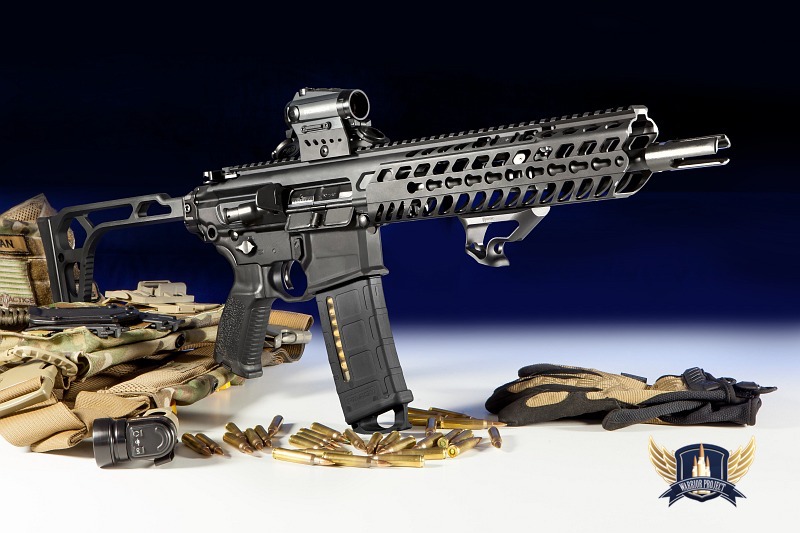 The SIG MCX rifle is the highest evolution of a firearm but with the same manipulation and control like an AR-15
SIG Sauer has been a strong presence in the law enforcement and military world for decades. The company's firearms are the gold standard for many agencies and their quality and reliability is unquestioned. SIG has recently unleashed two new rifle platforms that are packed with innovations and perfect for duty use.
It has a very innovative design and it is the rifle is similar to the AR-15 in that it is broken down into the upper and lower receiver groups. The forged and machined aluminum lower receiver houses the fire control system and buttstock, although unlike the AR-15 the MCX doesn't need a buffer assembly. This eliminates the need for a buffer tube and allows the MCX to utilize a skeletonized, folding stock. SIG actually offers a few different stock options for the MCX, both folding and collapsible, and they can be easily interchanged in seconds via the vertical 1913 rail mounting point at the rear of the receiver. The MCX's safety selector, magazine release, and bolt release are in the same place as an AR-15. Aan integrated trigger guard and a flared mag well and the MCX's lower half has just about everything you could ask for.
At first glance the MCX's upper receiver looks nearly identical to an AR-15 upper. Take a closer look, however, and you'll see they're almost nothing alike because the MCX's upper contains the majority of SIG's innovations. The MCX operates on a short-stroke piston system and this design SIG has used in some of its other rifles for decades. The gas block is mated to the barrel and houses the piston. It is adjustable for suppressed or unsuppressed configurations and easily disassembled for cleaning.
The piston drives an operating rod attached directly to the bolt group. The whole assembly is controlled by two overhead recoil springs and contained entirely in the upper receiver group. Cleaning and disassembly is incredibly easy with most of the fouling contained to the piston and gas block. This has been the primary gripe about the AR-15 rifle for as long as it has existed and the MCX runs much cleaner. This not only means shortened cleaning time, but also reduces the need for lubrication. The bolt and bolt carrier actually break down almost identically to those of an AR-15.
MCX rifles feature a slim-profile, chrome-lined, cold-hammer-forged barrel topped off with SIG's own muzzle device. The threads are standard 1/2x28, allowing for the attachment of virtually any aftermarket flash hider or suppressor attachment.
The barrel can be removed for cleaning or swapped out for a different caliber in minutes, even in the field, and all you need is a torx driver to get the job done. This modularity allows the user to switch between barrel lengths for different applications or even change from 5.56mm to .300BLK caliber on the fly. With an AR-15 this could only be accomplished by swapping entire upper receiver assemblies.
The front portion of the handguards incorporates a small 1913 rail segment that integrates with the main rail segment on the upper receiver and provides the mounting point for the folding front iron sight.
United States Special Operations Forces (SOF) where looking for the rifle that would be similar in size to an HK MP5SD (a suppressed 9mm submachine gun) and had to be at least as quiet. This unit in particular had been using MP5s for several decades, and those guns were 25 years past their life cycle. The SOF guys were looking for a rifle that could handle 5.56x45mm, .300 BLK and, with a new bolt, 7.62x39mm. The reason for .300 BLK is popular is that it doesn?t experience the radical velocity loss when we shorten the barrel. The 5.56 load is heavily dependent on muzzle velocity for good terminal effects, velocity it loses when we chop the barrel on CQB rifles. The .300 BLK loses about half as much velocity when we shorten the barrel, but it also fires a much heavier bullet that helps generate good terminal effects. The .300 BLK is also much easier to suppress effectively and is gaining popularity in SOF circles.
The SIG Sauer MCX makes amazing scenario a reality, giving military and civilian shooters alike options like we've never had before. Thanks to the SIG Sauer MCX's roots, we can rest easy knowing that, while it might be new, it's been thoroughly tested to the tune of tens of thousands of rounds by our nation's elite forces.
If you're looking for a new duty weapon and willing to take a step into the next generation this combo is sure to please.
View the embedded image gallery online at:
https://www.warriorproject.pl/en/firearms/147-sig-sauer-mcx.html#sigProId041d19dd57