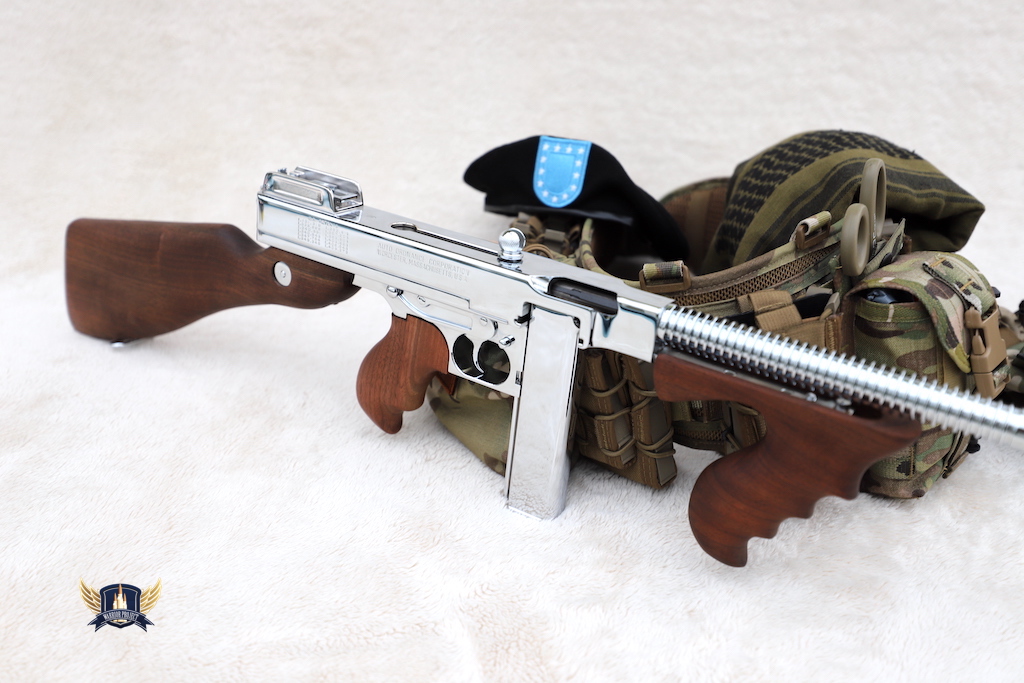 in 1918 which became famous during the Prohibition era, being a signature weapon of various organized crime syndicates in the United States. It was appreciated by both law enforcement officers and criminals. The Thompson submachine gun was also known informally as the Tommy Gun, Tom Song, Annihilator, Chicago Typewriter, Trench Broom, Chicago Submachine, Chicago Piano, Chicago Style, Chicago Organ Grinder, Drum Gun, The Chopper, and simply The Thompson.

The Thompson was favored by soldiers, criminals, police, FBI, and civilians alike for its large .45 ACP cartridge and high volume of fully automatic fire. It has considerable significance in popular culture, especially in works about the Prohibition era and World War II, and is among the best-known firearms in history. The original fully automatic Thompsons are no longer produced, but semi-automatic civilian versions are still being manufactured by Auto-Ordnance. These retain a similar appearance to the original fully automatic models.

There are very few truly iconic firearms, ones that the lay public as well as gun nuts can identify at first sight and The Thompson is definitely one of them.

General John T. Thompson recognized the average soldier needed a weapon that was compact enough to be easy handle when fighting in a CQB distance, but accurate enough to hit targets some distance away. It needed to have as little recoil as possible, but project enough lead to stop the enemy in the short distance.

For the ammunition, Thompson chose the .45 ACP cartridge. The U.S. Army had recently adopted John Browning?s Model 1911 handgun as the replacement for their Single Action Army models, and since Thompson designed his gun being used at the same distances as the M1911 was intended to be used it only made sense that they used the same ammunition.

The gun's identity as the weapon of gangsters was cemented in history after the St. Valentine?s Day Massacre in 1929 near Chicago where it was used to gun down seven rival mobsters. That event was the tipping point in the politics of the day, and would lead to the National Firearms Act which would initiate the way for gun control in the United States. The Thompson had already earned its place in history as the firearm that caused the first national gun control legislation to be passed, but the story doesn't end there.